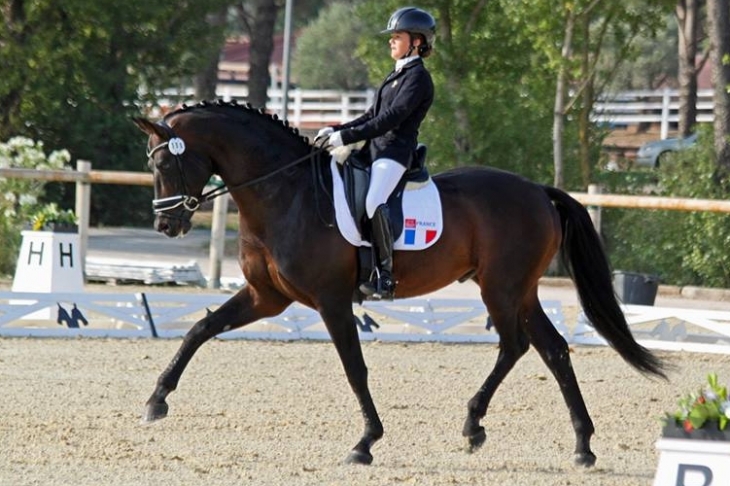 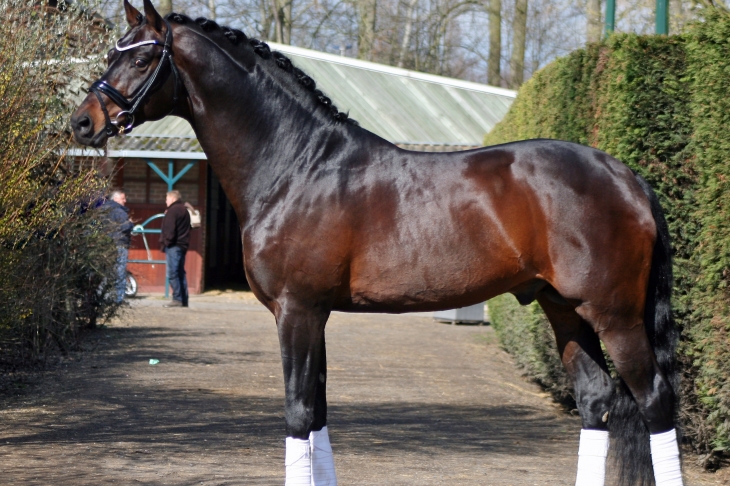 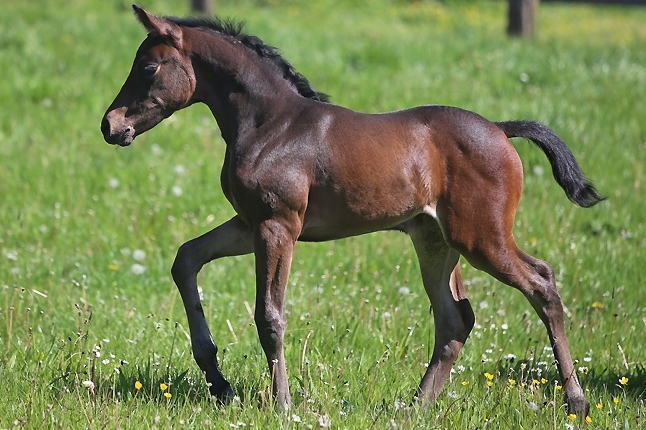 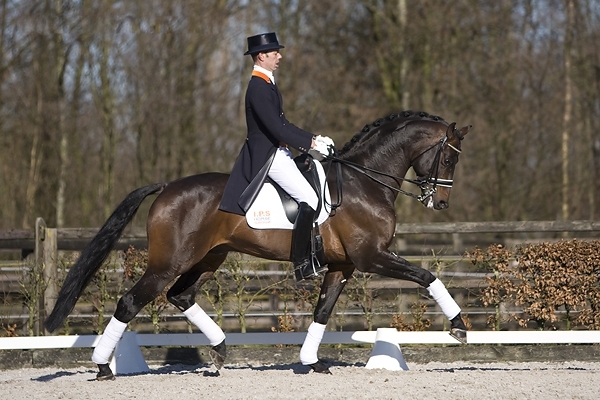 SANDREO, since 2017, is ranked 19th Best Dressage Stallion Worldwide (Source: World Breeding Federation for Sport Horses - WBFSH).  NRPS (Dutch Riding Horse and Pony Society) Vice-Champion at the age of 3, Winner of the KWPN Stallion finals at the ages of 4 & 5, Team Bronze Medallist at the European Championships, and 4th in the FEI World Youth Ranking in 2015, SANDREO is a proven stallion and readily used by breeders worldwide.

He is exceptionally well conformed with height and expression that he hands down to his offspring.  SANDREO is a stallion with fantastic movement and is most suited to spirited mares due to his excellent temperament.  At the time of the stallion-approval tests in Ermelo, his performance caused a real sensation, notably due to his supple trot and to his balanced and round canter with excellent propulsion.  His progeny is well thought of and we regularly receive requests for 3 & 4-year-olds. 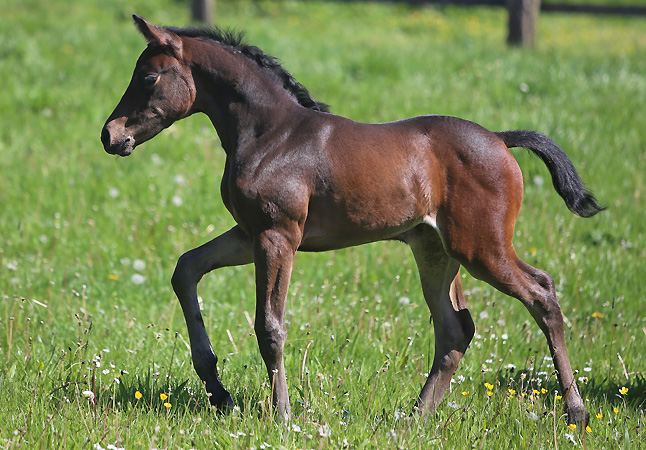 He is an asset for French breeding with the aim of producing excellent dressage horses and eventing horses.  Many of his offspring have performed at International Grand-Prix Dressage level, as well as in 3* & 5* International eventing.
His pedigree is such that it can be used for Show-Jumping and Hunter classes.

SANDREO is homozygous for the bay colour gene.  He has not been known to throw chestnuts.

SANDREO is approved to sire in many Studbooks, including the French Saddle Horse [Selle Français - SF].

- His sire, Sandro Hit, continues to make a name for himself: the stallion has taken the lead in the 2021 ranking of the best sires of Grand Prix horses established by the World Breeding Federation For Sport Horses (WBFSH). A performance achieved thanks to the performances of his sons and daughters in international competitions: Showtime FRH, Sir Dohherhall II, Sebastien, Salvino, Statesman, Sintano Van Hof Olympia, Scolari 4.

Sandro Hit was already the most represented stallion at the Olympic Games in Tokyo 2020 in 2021 and won the German 6-year old Championship and the World 6-year old Championship in 1999. In 2000 he was awarded the title of "Best Young Stallion". In 2017, he is 2nd in the world ranking of WBFSH dressage stallions: Selten HW, 47th world performer in dressage in 2017 under Anders Dahl, CDIO5*, Rio Olympics 2016; Jimmie Choo SEQ, Rio Olympics 2016, 85th world performer 2017, CDI-W and CDIO5* with M. Hendeliowitz; Showtime FRH, 3rd world performer in 2016, Olympic Team Champion and 6th individual at Rio Olympics; Ullrichequine's St Emilion, 38th world performer in 2016; Santana 37th world performer 2014, Sandro Boy 9, Sancette, Sancisco... all winners in CDI, CDI-W and CDIO. In 2003, one of her male offspring was 2nd in the German Foal Championship and Poetin won the World Championship for 6-year-olds in Verden. In the wake of this, she was sold at the PSI sales for a record sum of €2,500,000. In 2004, Santa Cruz, a young stallion born in 1998, was sold for € 750,000. In 2006, he once again dominated the young stallion approval tests in various German studbooks. He has many sons approved in different studbooks such as Showstar, FS Sandro Classic, San Rubin and Sir Donnerhall also won the "Bundeschampionat". Among the 90 stallion sons of Sandro Hit, a large number have been winners of numerous events such as Sir Willlson, Stedinger, Sunny Boy, Sandrit, Sommerhit, Stoiber, Samba Hit II...

In 2017, SANDREO is ranked 8th best sire at the Young Horses’ Championship in Saumur.  In Verden, SISTERS ACT ranks 4th in the 5-year-old World Championships, just like SIR SKYFALL in the 6-year-old Championship.

- SANDRO, his grandsire, also has proven progeny in show-jumping, notably due to SANDRO SONG, SILVIO I and SILVIO II.

PRETTIFY has 4 other registered progeny, including:

SANDREO’s grandam, JOLLIFICATION, is a daughter of AHORN, KWPN stallion.  Nominated “Ster”, she has 9 registered progeny, including:

SANDREO’s great great grandsire, ZEVENSTER, descends from ZINI VAN WITTENSTEIN, while his great grandam, DREAMSTAR, produced KASHMIR and is also the grandam of NUMMER ONE (Dressage Grand Prix) and of TWILLIGHT (dressage winner).

DREAMSTAR, herself a winner in dressage, also produced:

We also find good show-jumping winners in this lineage, such as SPENDID BLUE and WISHFULL, in addition to TWILLIGHT and NUMMER ONE for  dressage.

Winner of the Stallion finals at Hertogenbosch in 2005, level L, ridden by Hans Peter Minderhoud.

Awarded the “Dressage” label in Saumur in 2004.

8th at the 2015 European Championships in the preliminary Children’s event.

Team Bronze medallist at the European Championships for Children ridden by Eugénie Burban.

4th in the FEI World Youth Ranking in 2015 ridden by Eugénie Burban.

Ranked among the best stallions of the KWPN Studbook in 2016.

Ranked among the 20 best dressage stallions worldwide in the 2017 WBFSH ranking (19th position).

Ranked among the 100 best Eventing stallions worldwide in the 2018 WBFSH ranking.

During the stallion-approval tests in Ermelo, his performance and excellent temperament caused a sensation.  While his excellent trotting gait gives him exceptional movement, his canter is “round” and well-balanced with good propulsion.  Latterly, he competed in dressage tests at intermediary level.

SANDREO is 19th best sire of dressage winners worldwide in the 2017 WBFSH ranking. 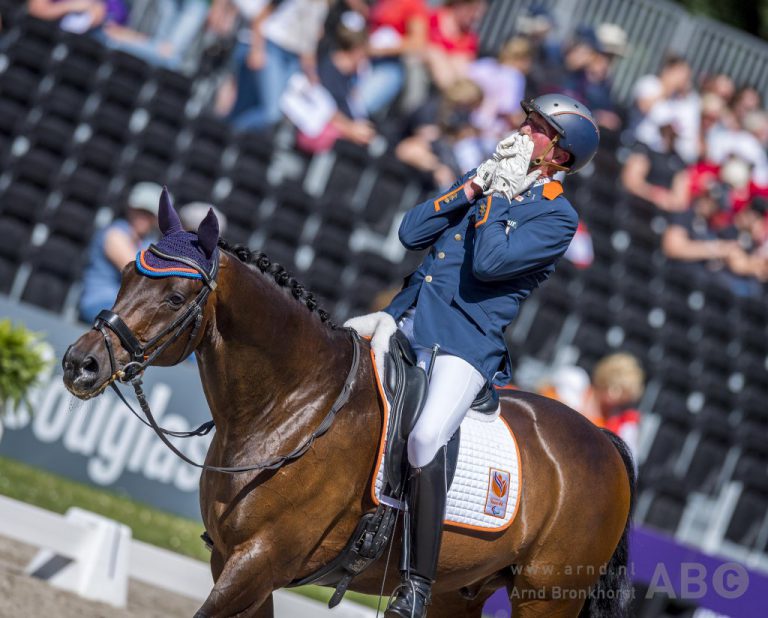 His progeny stands out with eye-catching long-legged foals and beautifully balanced supple gait.

His offspring are often described as “picture postcards” and easy under saddle due their excellent temperament.

His first generation of foals in 2006 was already noticed from the outset.  One of his foals topped a record sale at the KWPN auction: €35,000!  His son, ADAMO, is an Approved Stallion in the KWPN studbook.

In 2006, SAMBEJAH DES ABEILLES and SHENANDOAH won the Foal Championships at Saumur in both the colt and filly classes.

In 2007, he was again sire of Colt foal Champion in Saumur, TRESOR DES FRETTES, while TUBIANE DE L’OMOY and TACOMA were respectively 3rd and 4th of the fillies’ class.

In 2008, SALOME finished “Excellent” at the 4-year-old eventing finals in Pompadour.

At the 2009 Grand Dressage Week in Saumur, his offspring were again in the placings:

In 2010, UNGARO VALCOURT, sired by SANDREO and FEMME, AA (ex LE CHEVREUIL), was 2 y-o French Vice Champion in the Cross-Bred Anglo-Arabian (AACR) class at the Anglo-Arabian Grand Week in Pompadour.

In 2013, many of his progeny performed in both eventing and dressage:

COCO CHANEL, finalist at the 6 y-o World Championships in Verden in 2013 (1st of his group in the initial test and 8th overall).

TACOMA D'HORSET, 5th at the 6 y-o French Championships for eventing and 6th in the CIC* of the Grand Week in Pompadour.

In 2014, many of his progeny performed in both eventing and dressage:

COCO CHANEL, 3rd at the 7 y-o World Championships in Verden for the Netherlands

In 2014, SANDREO is indexed among the best KWPN stallions in terms of offspring, with excellent reliability at 93%.

AXEL, victorious at the Nice Grand Prix ridden by Alexandre Ayache, and 3rd in the Kür Grand-Prix with 71.75% at the CDI 3* Dress Tour;

In 2017, SANDREO is the sire of noteworthy winners:

SANDREO is the sire of several approved stallions, including dressage (CDI) performers:

EUROPEAN COUNTRIES : For all exports of fresh or frozen semen to European Countries: Download the contract in English and send it by email with a bank transfer of 1100 € + transport of the semen. (RIB at the bottom of the breeding contract). Call before 09h00 at +33 233 257 655 to order the fresh semen + email : haras-du-feuillard@wanadoo.fr

SANDREO is among the most popular dressage stallions used for breeding potential dressage and eventing horses.