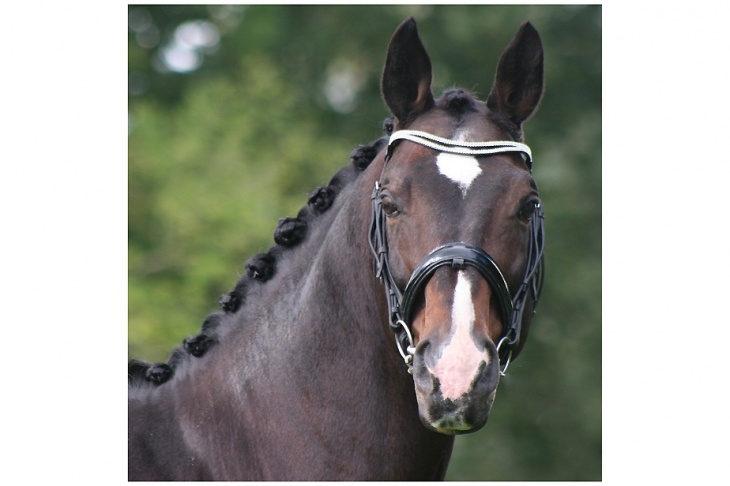 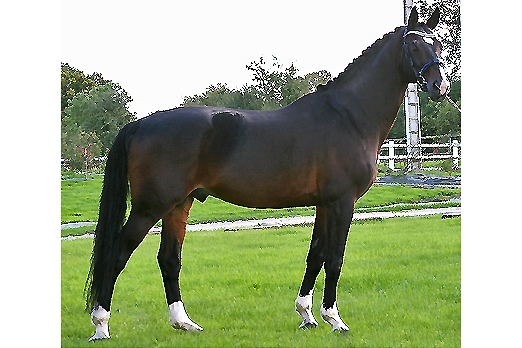 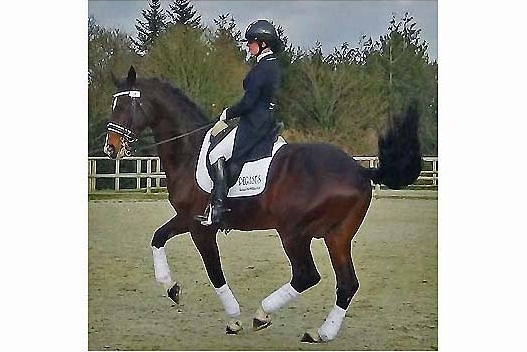 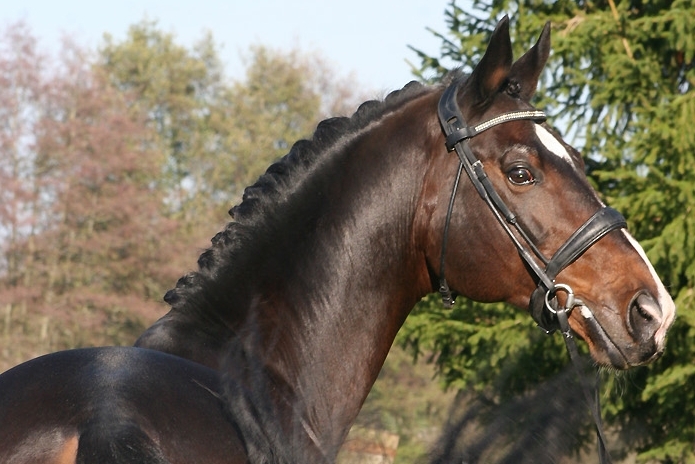 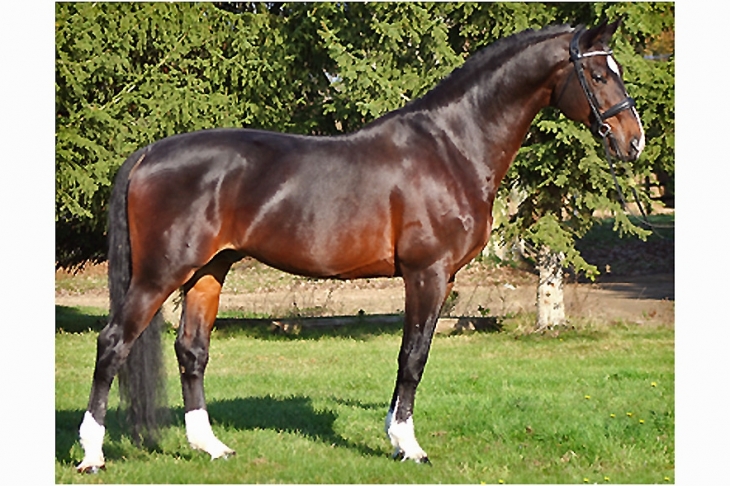 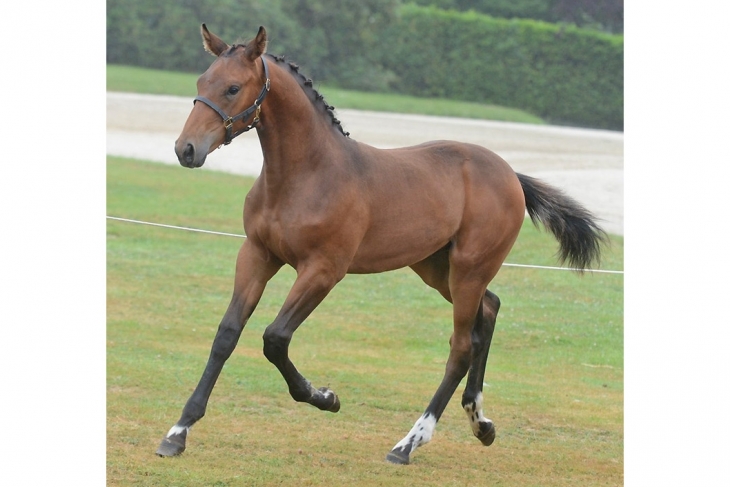 "This son of the late Gribaldi is interesting for the French breeding industry because he distinguishes himself by his suppleness, his propulsion, his elasticity and an exceptional mind. He transmits to his offspring: a solid model, size, chic, suppleness, scope and ease under saddle. He is suitable for all types of mares.

It is an exceptional genetic at a price accessible to all! His quality/price ratio at 450 €TTC in 2022 with a Living Foal Guarantee is particularly interesting for the production of Dressage horses. Esteban's maternal line has produced good international winners in show jumping, as has Nimmerdor, which means he can be used for jumping, eventing and Hunter. Osteoarticular status: Excellent. Good fertility. Pegasus is approved to produce Selle-Français. 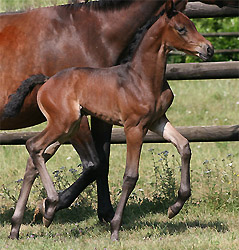 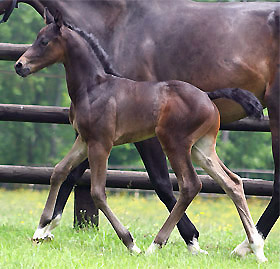 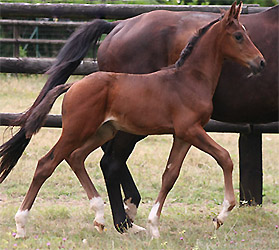 His sire, Gribaldi, is the 3rd best sire in 2010 but he is also the best sire of world winners in dressage at the Stallions Ranking WBFSH. He is notably the sire of Totilas, World Champion in 2010 at the JEM in Lexington under the saddle of Edward Gal, but also of the great international dressage winners Sisther de Jeu, Passe-partout (IDR 168 in 2011), Girasol, Talitie (IDR 162 in 2011),...

His offspring, the oldest, are now 12 years old and several of them are going out at Grand Prix level.

Gribaldi's offspring are well known in the Netherlands for their ease of piaffe and passage. This quality is also found in Pegasus.

The Grandfather of Pegasus is the Trakehner Kostolany, himself a Grand Prix horse. Kostolany won the Siegerhengst in 1995, a unique event. Like Gribaldi, Kostolany has several sons approved for breeding: Bertone, Showmaster, Silvermoon, Tolstoy, Sans Souci and Polansky. Gribaldi's dam became an Elite mare in 1995.

Her sire Esteban, is the sire of good international winners in show jumping such as Ino, Hofgut Liederbach's, Limbo, CSIO with Otto Becker, Iceberg, CSIO under Alison Firestone, World Cup finalist in 2000.

Pagasus, labelled Keur, has 2 other products:

Her sire Lt Generaal is a good sire of dams in Holland,

Alana, has 1 other product.

This is the KWPN maternal line n°769, which has produced the stallions Rousseau, winner in Dressage, Wieland, Werner, Ricardo Z,... and international performers in show jumping as well as in dressage: Cupido, winner in CDI, 82nd of the WBFSH dressage ranking in the 90's, Bo and Beau, winner in CSI, Butragenia, good winner in CSI in 2011.

The Dutch stallion Nimmerdor, labelled "préférent", is in the maternal line. NIMMERDOR is the sire of numerous show jumping winners including ZADOK, GOLDENBRIDGE, GARAVOLA, UP TO DATE and ALDATO. NIMMERDOR has won at the highest level under Albert Voorn and Bert Romp NIMMERDOR, head stallion of the KWPN studbook. He is the sire of many approved stallions and great champions such as AHORN, HEARTBREAKER, ...

You could say that he is made like a father. Pegasus has a very nice neck, a short, very strong back and a powerful hindquarters. He is very pleasant under saddle and has a calm and generous character.

Pegasus also has excellent tissues. He is very strong in all the movements gathered and of Grand Prix level: Passage-Piaffer-Spinning-Changes of feet on time. He has been placed in classes: Pro Elite Grand-Prix and Intermediate II.

Commentary from the 2013 Stallion Guide published by L'Eperon: "After a successful career in Young Horse classes, where his quality was unanimous, he has progressed to Grand Prix level. His gaits and origin already make him an interesting stallion and his dressage ability, known by experts, makes him recommended for all types of mares. He deserves to be used despite his age. His first offspring will be seen with interest."

2002: 3rd in the French Classic Cycle Championship for 5 year olds in Saumur

2003 : 3rd of the French Championship of the Classic Cycle 6 years old in Saumur

2003 : 1st in the final round of the 6 year old Classic Cycle Championship in Saumur

€ 550 incl. VAT at reservation payable on reservation with “live foal” guarantee, on the assumption of your mare being pregnant.