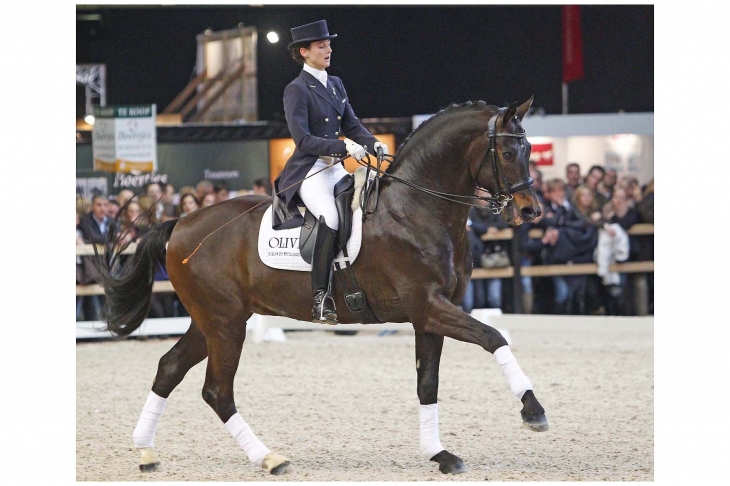 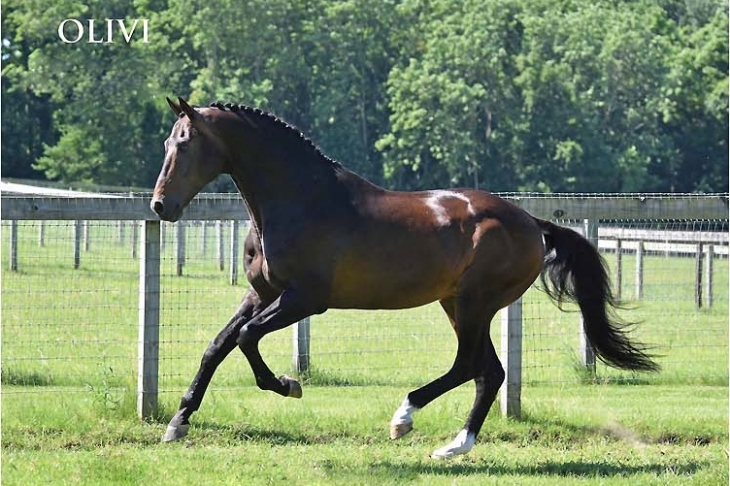 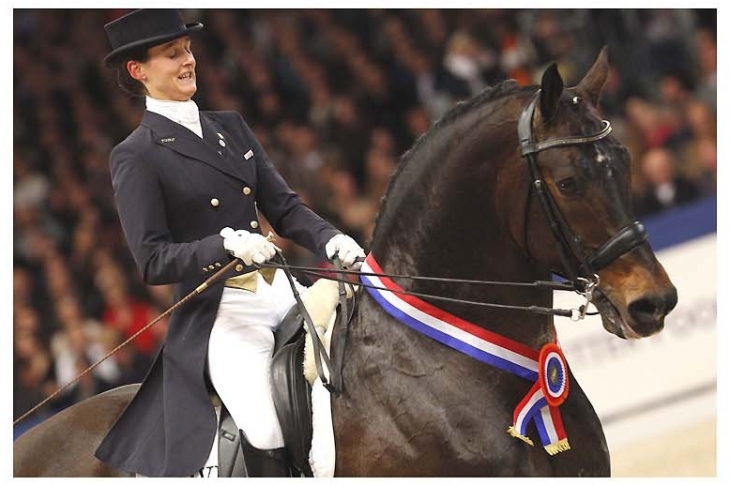 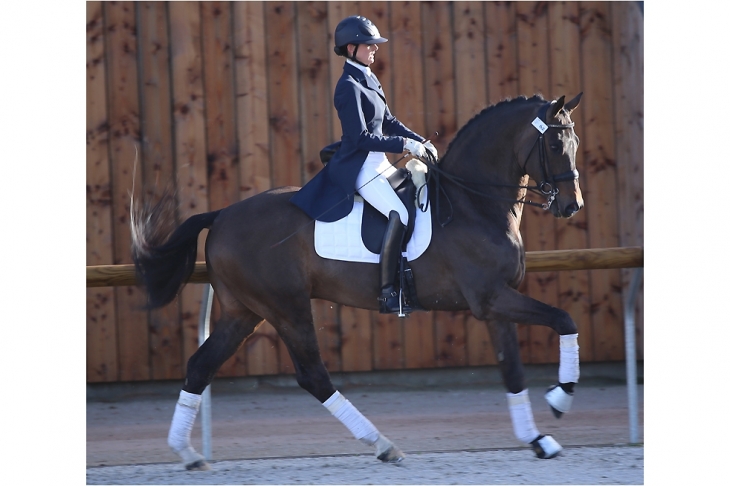 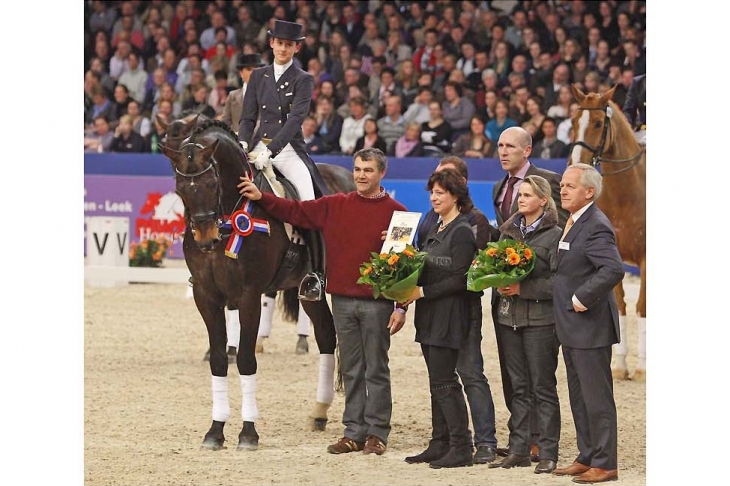 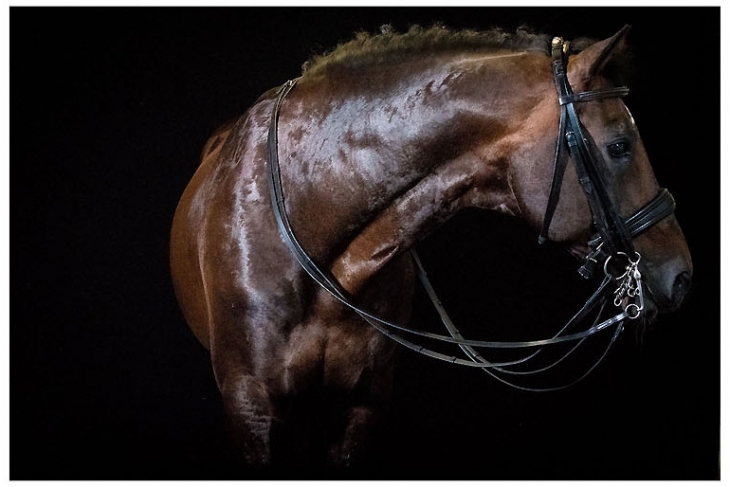 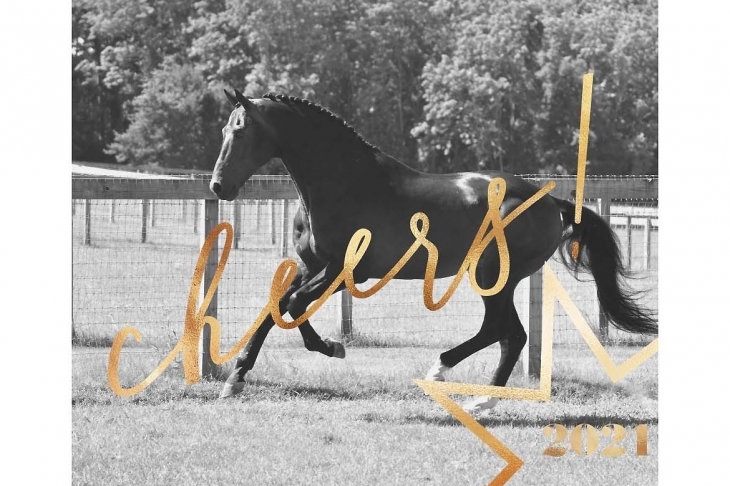 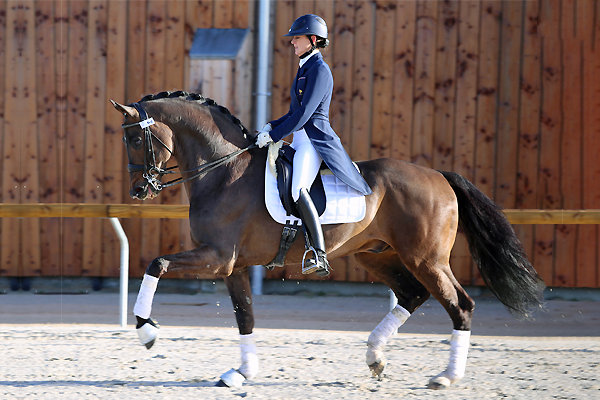 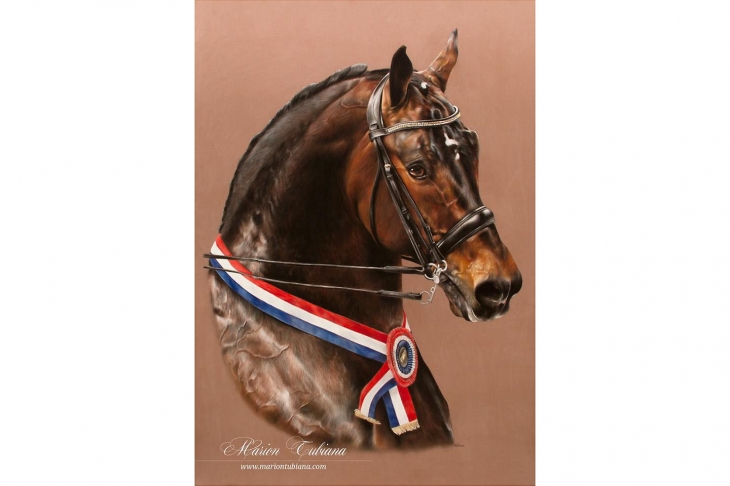 Olivi is a wonderful opportunity for breeders!  His progeny of International Grand-Prix level is remarkable, not only physically, but also in terms of willingness and aptitude.  Olivi also has several sons worldwide approved as stallions. Olivi's imprint in the genetics of many current stallions testifies to his high genetic value: Jovian (KWPN), UB40, Apache, Grand Galaxy (KWPN), Global player (Oldenburg), UB40 (KWPN), Janeiro Platinium (KWPN), ...
For several years, Olivi has been ranked 2nd best KWPN sire behind his own sire, JAZZ, having acceded in 2017 to 18th position in the World Best Dressage Stallions Ranking (source:  World Breeding Federation for Sport Horses - WBFSH).
Along with his modern, very chic look and excellent movement (judged 8 for walk/trot and 9 for canter), he transmits an ample walking pace, a steady trot showing elevation and suppleness and a remarkably balanced powerful canter.  Prior to his entry at Le Feuillard Stud, OLIVI triggered off tremendous success with KWPN and Oldenburg breeders, who were disappointed to see him exported.  He now stands at stud in the United States.
Olivi is also an interesting cross with spirited mares for breeding eventing horses.
He boasts an excellent fertility rate for his frozen semen.  Osteo-articular status: Excellent.
Approved to sire in the French Saddle Horse [Selle-Français], KWPN and Oldenburg Studbooks.
WFFS Free. 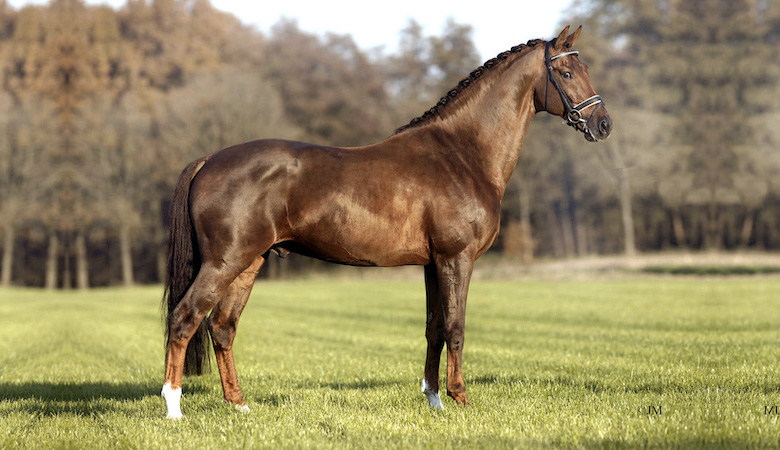 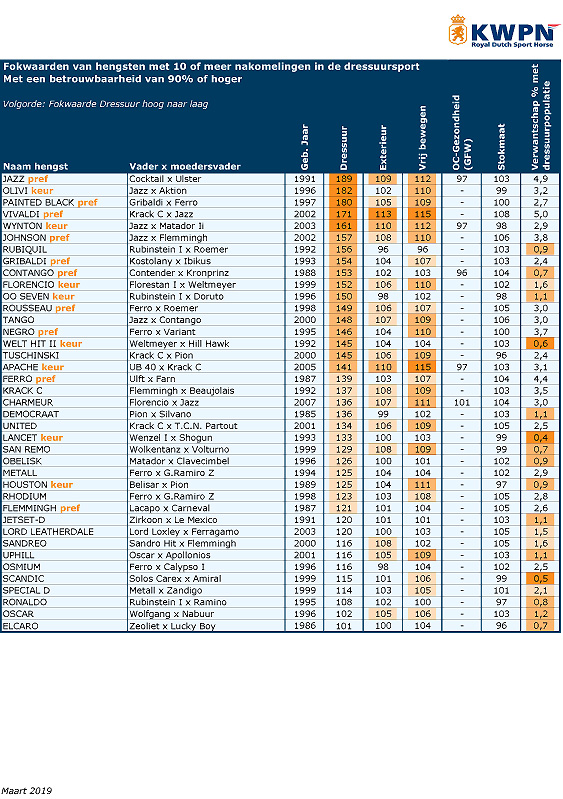 OLIVI’s dam, HALLA UTOPIA, descends from the famous “Utopia” line.  She was victorious in CSI Intermediary I and nominated “Elite Preferent Sport”.  Of her 8 offspring, we note:

- LADY UTOPIA (by NIMMERDOR, SF), dam of UP TO DATE UTOPIA and WONDERFULL UTOPIA, broodmares having been nominated “Ster”; and

OLIVI’s grandam, CHARISMA UTOPIA, competed at Intermediary level, and produced WUNDERBAR (by NURPRIMUS), a showjumper competing at 1.40m level in Holland.  Nominated “Keur Preferent Sport”, she had 11 offspring, including:

- UNIKA, dam of the great international performer and stallion, ARKO III, 5th in the 2008 WBFSH show-jumping world ranking, having competed at the Athens Olympics, the European Championships at San Patrignano & Donaueschingen, as well as in the World Cup finals, ridden by Nick Skelton.

- WUNDERBAR (by NURPRIMUS), a winner in show-jumping at 1m40 level in Holland.

OLIVI is the 3 y-o KWPN Studbook Vice-Champion Stallion in Hertogenbosh, with a Dutch dressage sire index of 168 (CD 85%).  He was successfully ridden by Bart BAX at International Small Tour level.

In 2005, he brilliantly won two international ZZ Grand Prix in Ermelo and finished 3rd during the Winter Cup.

In 2008, he finished 4th at the French Young Riders Championship, St-Georges level, ridden by Raphael THOMAS.

In February 2010, Olivi  was invited to Hertogenbosch by the KWPN Studbook to be presented to Dutch breeders.

In 2010, he participated in various shows in the Netherlands before returning to France to enable fabrication of frozen semen at Le Feuillard Stud and to compete in the St Lo dressage tests ridden by Maxime COLLARD, finishing 2nd in the Prix St-Georges.

In February 2011, Olivi  was awarded the "Keur" predicate by the KWPN Studbook.

The "Keur" predicate is awarded when a stallion’s offspring proves to be excellent compared to that of other stallions with regard to performance and conformation.  In practice, this implies that a stallion must have a performance index superior to 140 with a high reliability percentage.  The ability for the stallion to transmit good conformation is a mandatory factor for being awarded the predicate.  A stallion, nevertheless fulfilling all the performance conditions for receiving the "Keur" predicate, can be stripped thereof if he fails to transmit good conformation to his progeny.  The KWPN stallion selection committee agreed that OLIVI (JAZZ x AKTION) deserved the "Keur" predicate based on his high genetic value and on the qualities that he has transmitted to his offspring aged 7 and over and which have performed at top international level.

In 2017, Olivi is 18th best world dressage stallion in the WBFSH Ranking.

UCELLI T was the 2006 National Champion of the Pavo Cup in Ermelo, 2nd at the 6 y-o World Championships in Verden, winner of the Prix St-Georges in Gelderland ridden by Hans-Peter Minderhoud, and competed in the intermediary Kür, the St-Georges and the Assen Small Tour in 2009.

ULISSA ranked 2nd in the Pavo Cup at the age of 5 in Gorredijk and 6th in the Assen St-Georges in 2009.

UNIVERSEEL was approved as KWPN stallion with excellent marks at the performance tests.

VILUVIENNE finished 4th at the 3 y-o central competition in Veghel.

UDORA was the awarded the following marks in the performance tests: Walk 8, Trot 9, Canter 8.5, Aptitude for dressage 8.5

ULRIKE was the awarded the following marks in the KWPN performance tests: Walk 8, Trot 8.5, Canter 8.5, Aptitude for dressage 8

OLIVI’s first offspring made their debut in 2006 at National level at the age of 6, some even competing up to Grand-Prix level, namely: UCELLI T, TRIVIANT 2, TAMORA, TRAVOLTA’S NIEUWMOER, UNETTE and USER.

At the auction, his progeny arouses much interest; 3 of them combined amounted to €690,000:

TRIVIANT 2, at the PSI Prestigious Sale in 2005, was bought for €420,000 by Anne Katrien Linsenhoff, international dressage rider.  TRIVIANT 2 was ranked among the 600 best GP horses worldwide by the WBFSH in 2008.

Olivi is the sire of the 4 y-o Eventing Classic Tour Champion (in Pompadour):

Olivi is approved to sire in the French Saddle Horse [Selle Français - SF] and KWPN Studbooks.

Olivi is again the 2nd best Dutch sire in the KWPN Studbook for the third year in succession, just behind his own sire, JAZZ, with an index of 181 and a reliability rate of 90% (“IDS MAGAZINE of 13 January 2017”).