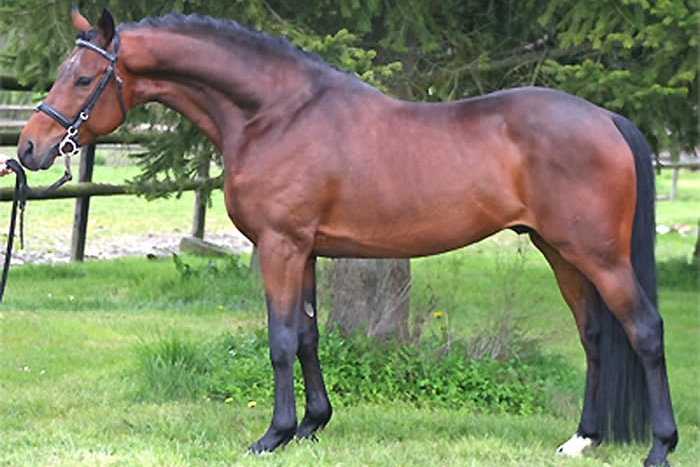 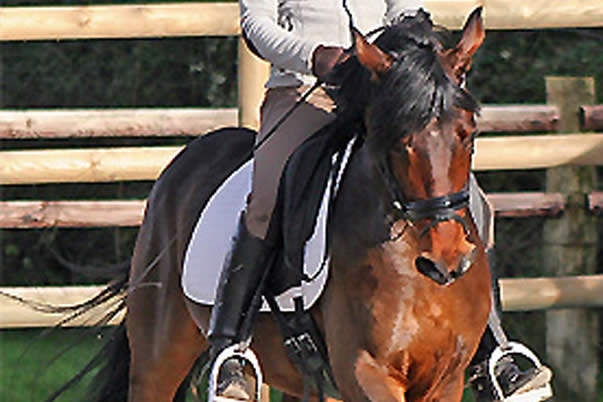 Harlem du feuillard, BWP is the product of the German Grand Prix pony: Champion de Luxe and a complementary Anglo mare. He was born at the Haras du feuillard in France. He is distinguished by a great amplitude and a beautiful energy. He has an excellent 4-stroke walk, ample, a trot with a lot of elasticity and suppleness of shoulders and a round and balanced gallop. We love his character and his ease under saddle for children. In 2010 he won the France Dressage Championship for 3 year old males with exceptional marks: 9 for walk, 8.50 for trot, 7.50 for canter and 8 for his ease under the saddle and a total of 80.667 % for the model. In 2011 and 2012, he successfully took part in the 4 and 5 year old dressage Classic Cycle events and was classified ELITE at the 6 year old Classic Cycle in Saumur in 2013. In 2014, it is under the saddle of the young 11 year old rider, Eugénie BURBAN, that they become Departmental Champions (Orne) and Champions of the Inter-Regional Normandy-Bretagne.

He is a modern stallion, rather sporty, who should mark his offspring by his elegance and breadth, but also transmit his suppleness of shoulders, his engagement of hind legs, his amplitude and his beautiful energy. In his lower line, we find the blood of Singasinga xx, a thoroughbred stallion who has run on the flat and over jumps, as well as the exceptional thoroughbred sire, Grand Trésor, who has produced numerous winners, some of whom have distinguished themselves at the highest level in France and England. It is therefore particularly interesting to use in Dressage but especially to produce ponies for eventing. Osteo-Articular Status : Excellent.

The performances of Champion de Luxe are numerous, of which the most significant are the following

Winner of the Rheinland championship in 2001

Winner of numerous A and L level events

Her dam, Golden Fleur, is herself a Rheinland Pony Breeding Champion and the dam of three state award-winning mares and two award-winning stallions who were champions in stallion trials.

There are therefore three European winners in his progeny.

In the paternal line, we find the blood of the fabulous crack : FS GOLDEN DANCER :

Stallion Approval Champion in 1994, Total of 15 victories in dressage classes at A and L levels, Vice-Champion of the German Federal Championship in 1996, Federal Champion for 5 year olds Sire of 10 stallions and numerous International Dressage Performers including : Golden Highlight, Giacomo, Ganzer Mann, imported to France

Grand Trésor xx began his career at the age of two on the racecourses of the West where he was born. He distinguished himself on the flat and in jumping races. He was an exceptional sire, producing numerous winners in races, some of whom distinguished themselves at the highest level in France and England.

Grand Trésor, by Grandchant and Clef du Trésor by Timmy my Boy, was born in 1981 at the prestigious Madame Couturié stud in Savigné l'Evèque in the Sarthe. He began his racing career at the age of 2, winning a race at the Saint Cloud racecourse. At 3, he distinguished himself at Maison Laffitte and finished 4th in the Prix Lutèce (Gr III) at Longchamp. Over jumps, he placed in the Grandes Courses de Houches at Auteuil, Enghien, Cagnes sur Mer, the Grand Prix d'Automne at Auteuil, winning the Grande Course de Houches de Printemps at the age of 6. His racing career ended with 11 victories including 7 over jumps and 29 places including 21 over jumps. 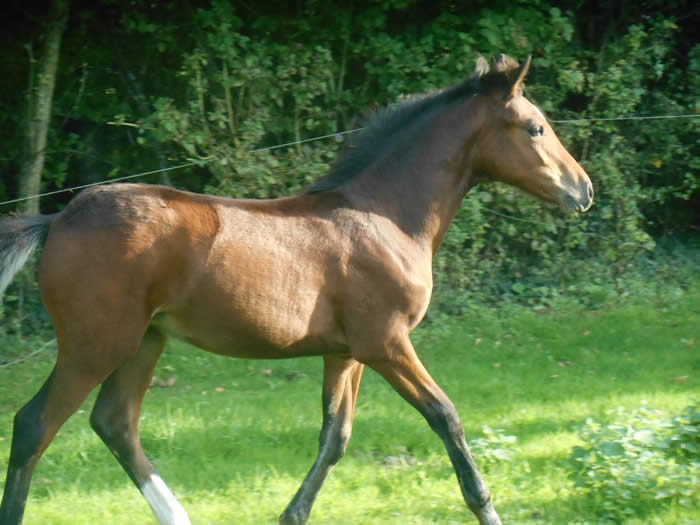 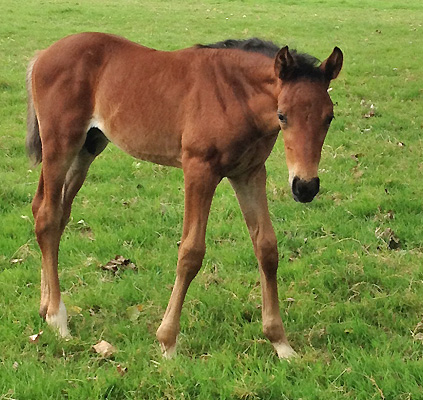