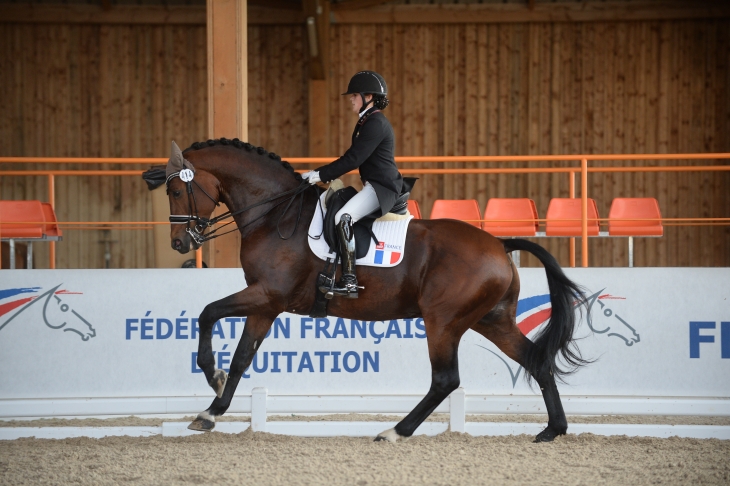 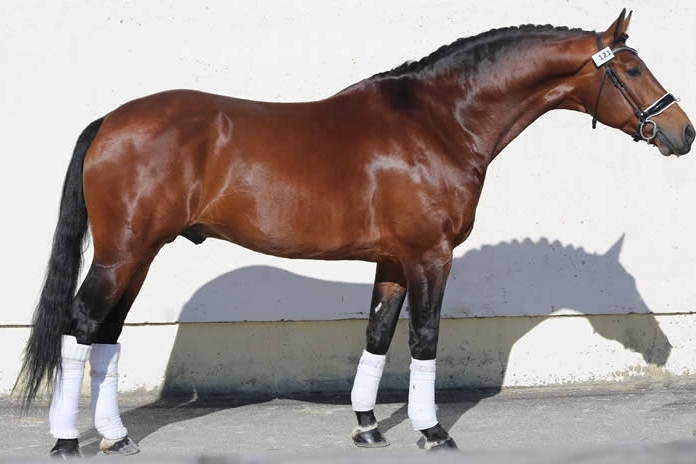 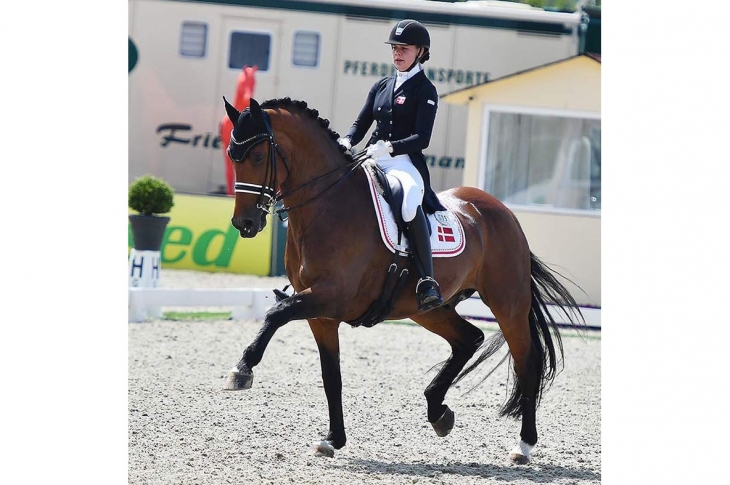 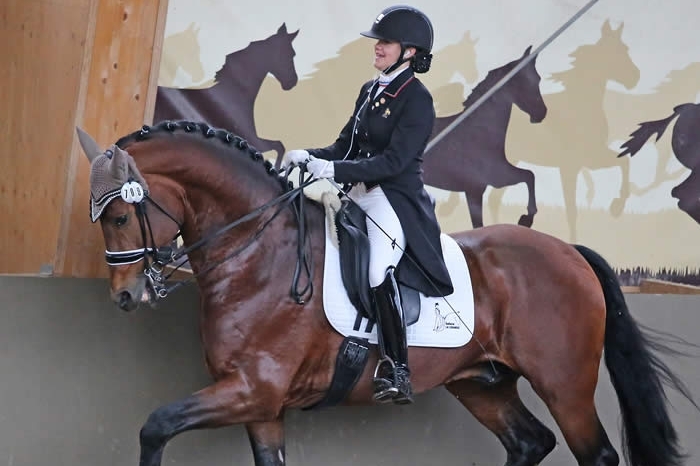 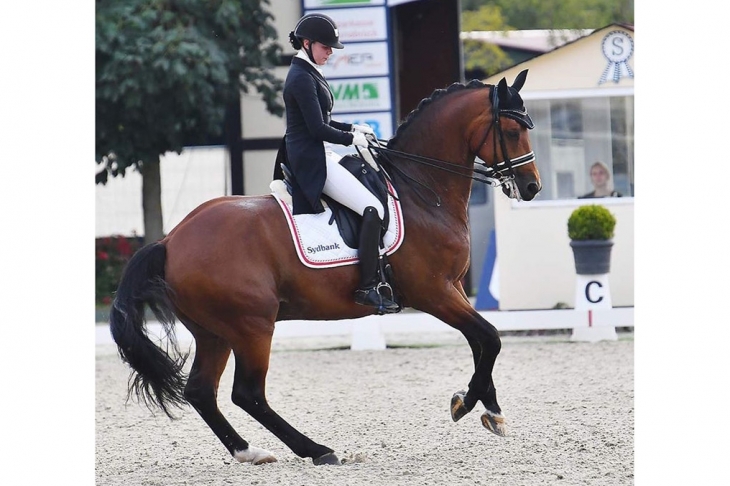 ANTANGO DU FEUILLARD descends from one of the best dam lines of the KWPN Studbook.  His own dam, ORONIA (JAZZ x ULFT) is multi-labelled for her quality bloodlines and offspring, i.e. Elite - Preferent - Prestatie - Sport (Dressage).

Indeed, the entire dam line is prestigious, with each broodmare being labelled in the KWPN Studbook.

The sire line is equally as prestigious, wherein we find several KWPN breed sires, namely the famous International performer, OLYMPIC FERRO, sire of the stallions ROUSSEAU, JOERIS (ridden by Philippe Limousin in GP Dressage), JASPER (GP Dressage), JOERY (GP Dressage), etc., as well as of such 1m40 showjumpers as JANOESKA and KOKARDE-E, amongst others; FLEMMINGH, sire of such high-level international dressage horses as KRACK C (ridden by Anky Van Grunsven) and LINGH (ridden by Edward Gal), as well as of such showjumpers as JILVANO (1m40), KALLI (1m30), KOKO-LADY (1m30), etc.

On the dam’s side, we find JAZZ, the leading KWPN sire in terms of progeny and sire of many GP horses as well as of several stallions.

ULFT, represented in both the sire and dam lines, is the sire of such show-jumping stallions as BOSTON (1m30) and DAGMAR (1m40), as well as of the jump horses, BALTIMORE & CYRANO (1m35) and of the dressage horses, CAESAR (GP Dressage) and DEXICO (GP Dressage), etc.

Using ANTANGO on your mares is a wise choice!  For his first generation in Germany in 2013, he was awarded 1st Prize by the Oldenburg Studbook for the quality of his foals, and in 2017, 2 of his sons respectively won the stallion shows in Neustadt / Dosse and Marbacher Wochenende in Germany.  ANTANGO, at the age of 10, already has 4 sons approved as stallions in Germany!

Strength, suppleness, balance, propulsion, height and chic are the main qualities that ANTANGO transmits to his offspring.  He is most suited to spirited mares due to his excellent temperament.  His pedigree is such that it can be used to make an interesting cross for eventing.  ANTANGO is among those stallions used by the Germans due to the interesting bloodlines, despite belonging to a foreign studbook.

His sire, AMPERE, was Champion of the 2008 KWPN Stallion Selection at Hertogenbosch in the Netherlands.  Many of his foals have attained Top Price at the sales.  In 2011, AMPERE was the sire of the Vice-Champion at the Foal Championships in Lienen, Germany.  At the auctions in Vechta, one of AMPERE’s sons was sold for the top price of €200,000.

He is the sire of honourable winners in CDI St-Georges and Inter I, namely: EOWYN, ECUADOR VD, EMERALD S, FOSBURRY and FARZANA, as well as many good show-jumping and eventing winners, such as EDISON (CCI1*) and ELFJE (CSO 1.30m), amongst others.

He is the sire of 60 stallions, including AMBER and ELECTRON, both good show-jumping winners.

ROUSSEAU, AMPERE’s sire, was the 2003 Vice Dressage World Champion for Young Horses in Verden.  FLEMMINGH, also present in ANTANGO’s pedigree, is the sire of prime international horses, notably KRACK C, as well as many good showjumpers, such as JILVANO KALLI, KOKO-LADY… or even LINGH.  Hence, through these origins, we find, not only excellent dressage horses, but also good showjumpers.  ANTANGO also reveals a certain aptitude for jumping.

FERRO, a major international dressage performer, finished 6th at the Rome Olympics in 1998, won the Berlin CDI GP, ranked 1st in the European League, came 2nd at the World Cup dressage final and finished 5th individual at the Sydney Olympics.

He was awarded the “Preferent” label during his lifetime, which is the highest distinction of the KWPN Studbook, generally awarded posthumously!  Many of his sons are approved stallions and are showing their influence across the KWPN Studbook, notably OSMIUM.  FERRO is also the sire of performing showjumpers, namely Audi’s PALOMA, 2nd at the Lisbon CSIO***** Nations Cup in 2008 ridden by Eric van der Vleuten, as well as FERRARI and NORDSTAR, etc.  In dressage, he is the sire of JOERIS, JOERY, LORENZO, JARLOT, JAZZ DANCER, amongst others.

ANTANGO DU FEUILLARD descends from one of the best dam lines of the KWPN Studbook.  His own dam, ORONIA (JAZZ x ULFT) clocked up many placings and wins in the Small Tour (St-Georges & Inter I) in the Netherlands.  She achieved an exceptional 189 breeding index in the KWPN Studbook and had 11 progeny, including:

- VONTANGO-B (CONTANGO x JAZZ x ULFT), who was placed several times at Grand-Prix level, with a 4th & 6th place in the Addington CDI3* in 2012 ridden by Madeleine Witte Vrees;

JOYCE, his grandam, had 7 offspring, including:

- EVITA B, dressage winner; and

ORONIA’s sire is JAZZ, 5th leading sire of winners in the 2017 WBFSH dressage ranking, leading sire in terms of high-level competition representation and among the most popular stallions in the Netherlands and around the world.  He is an excellent international performer and has clocked up excellent achievements with his rider Kirsten Beckers.  He takes the Team Gold for Germany at the 2005 CHIO in Aix-la-Chapelle.  He is also the winner of the GP in Kootwijk with an average score of 72.78%.

JAZZ boasts the maximum index of 182.  He is the sire of several KWPN stallions, such as OLIVI (JAZZ x AKTION).  For several years, JAZZ is the leading sire in the WBFSH Stallion ranking.

ANTANGO is a modern stallion with very elastic and dynamic movement.  He has great strength in the hind and portrays wonderful charisma.  He has an ample 4-beat walking pace, a steady supple trot and a powerful balanced canter.

Dennis Fisher, Danish National Coach has officially selected Antango du Feuillard and his rider Maria Mejlgaard Jensen for the European Young Riders Championship to be held in Hungary in August 2020 :
70.382 % on the Team event and 71.617% on the individual event of the 2020 European Young Riders Championship in Hungary - Rider: Maria Mejlgaard Jensen 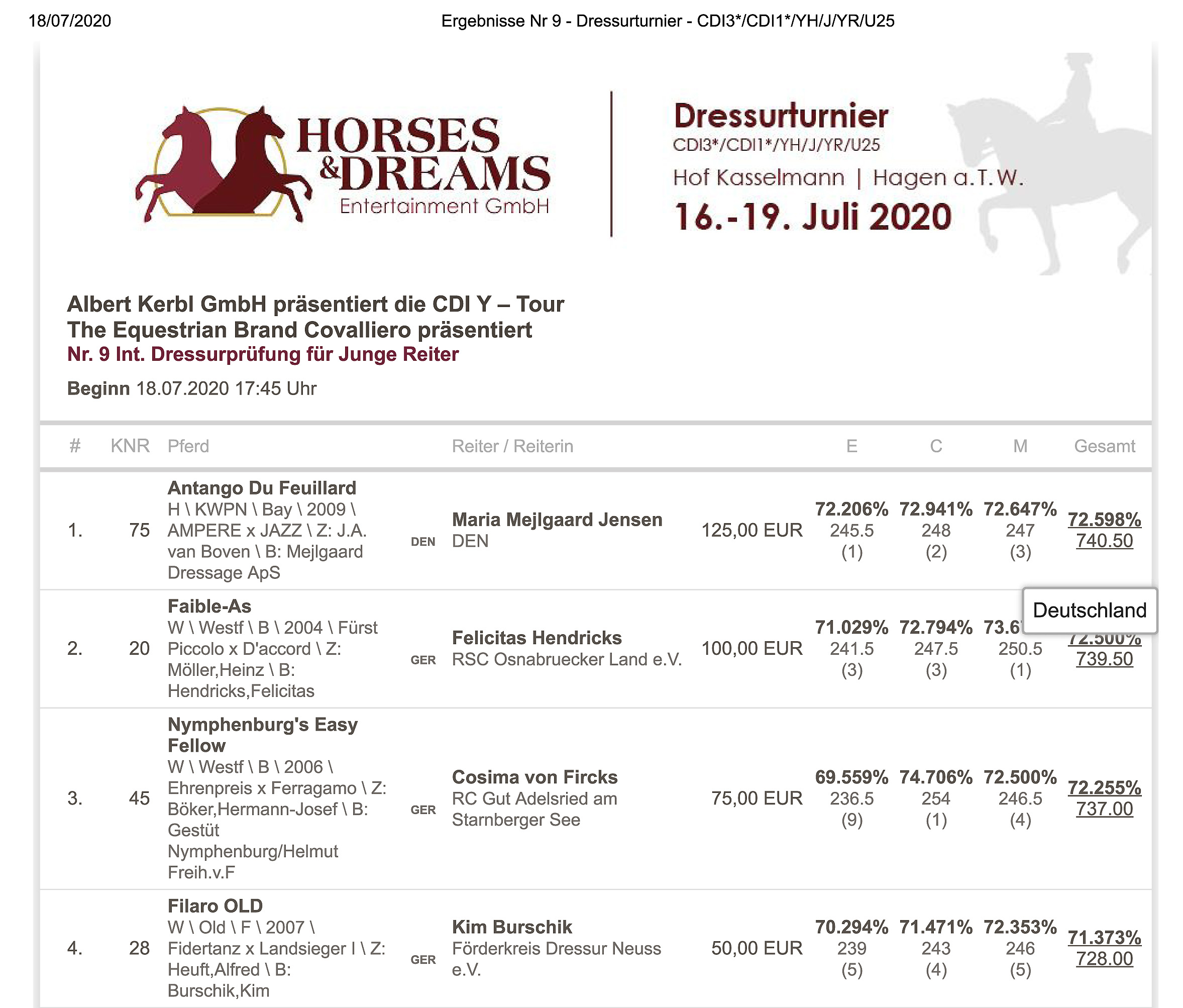 His pedigree also authorizes him to be used in crossbreeding for the complete suit. He is himself gymnasticated on sequences between dressage trainings.

In 2012, ANTANGO was awarded excellent marks at the 30-day tests in Germany:

9.0 for his spectacular canter,

8.5 for ease under the saddle.

In 2013, ANTANGO was again awarded excellent marks at the 70-day tests in Germany, confirming his quality movement and ease under the saddle.

He also received 1st Prize with the Oldenburg Studbook for the exceptional quality of his 1st generation of foals.

He was evaluated on his dressage aptitude, his conformation, his locomotion and his behaviour.  He was awarded the following excellent marks:

In 2017, Two offspring of ANTANGO were judged among the best candidates at the Stallion Approval contest in Germany.  ANTANGO, already at the age of 8, has several sons approved as stallions, including:

In 2013, One of his daughters is Champion Foal in Ganderkesee, Germany.

His offspring are renowned for their good temperament, their modern look and their excellent gait: ample walk, supple steady and energetic trot, strength and engagement of the rear at a canter.  He also seems to transmit height.  Many German breeders have been using him since 2012 and come back year after year!

In 2016, VINJA, a mare out of ANTANGO x DETROIT x ROHDIAMANT, was Top Price at the Vechta Sales in Germany.

ANDIAMO, a son by ANTANGO x DE NIRO, has been approved as stallion and was Vice-Champion of the DSP selection (German Sport Horse) in Neustadt / Dosse.  He is one of the only 3 “Premium” stallions.